For the past week or so, I’ve been preoccupied with the fate of some graves and their monuments in two very different Welsh nonconformist chapel burial yards, one in Swansea and one in Bwlch, near Brecon. In both cases my concern was prompted by the appearance of Public Notices in local newspapers announcing the intention to remove and relocate gravestones and the human remains beneath them.

Back in October 1998, a Public Notice appeared in the South Wales Evening Post giving details of the intention to remove human remains, tombstones and monuments from the Crug Glas chapel graveyard, Chapel Street, Swansea, in order to build an apartment block:

Then, two weeks ago, almost exactly fifteen years after I first became aware of Crug Glas Chapel and its burial yard, I was contacted by Sue McGuire who had visited my webpage. She wrote:

I came across your webpage while searching for pictures of The Palace Theatre in Dyfatty, Swansea.
I was so intrigued at the story of the graveyard of Grug Las that I went and found the graveyard, but had to return with a step ladder in order to take some photos.
The graveyard is in a far more overgrown state now – and although there is a gate in the fence, it cannot be opened.
I would like to find out more about this story – and establish where they moved the grave contents to. I do hope they were treated respectfully – the graveyard certainly was not.

I added her report and photographs to my original webpage as a second follow-up report.
Since then we have both been attempting to find out more, not only about the present ownership of the graveyard, but also about Crug Glas Chapel to which it was attached. Crug Glas Calvinistic Methodist Chapel was originally built in 1799, rebuilt in 1869/70, and demolished (we believe) in the late 1980s. West Glamorgan Archives Service kindly provided some old photographs of the chapel, possibly taken years before it was demolished. An example is shown below:

A former member of Crug Glas Chapel recalled that Crug Glas was one of three neighbouring Welsh Calvinistic Methodist chapels in Swansea. By the 1980s, all three had diminishing congregations and premises that were expensive to maintain. Consequently, the members decided to close two of the chapels and worship together at the chapel they judged to be in best condition.  Crug Glas Chapel did not survive. Everything usable was salvaged from the building and it was then sold off and later demolished.

In 2013, the chapel burial yard is in a desperate state of neglect. Apart from fencing it off, presumably for safety reason, nothing seems to be being done to care for this final resting place for a considerable number of Swansea’s former residents.

Precise details of the demise of Crug Glas Chapel have yet to be revealed. For example, a report by The Royal Commission on Ancient and Historical Monuments of Wales claims that the chapel was demolished in the late 1980s, following a fire, but to date, we have been unable to find any evidence to substantiate this story.

As Bwlch is only a ten-minute drive away, at the first opportunity I grabbed my camera and visited the chapel and took photographs of the chapel building and its burial yard, paying particular attention to the tombstones under threat.

Unlike Crug Glas, Penuel Chapel building is still intact, albeit no longer a place of worship, and the burial yard is well looked after and still in use. The 24 monuments scheduled to be relocated are clustered around the left hand front and side of the chapel. Many of them are visible in the photograph below: 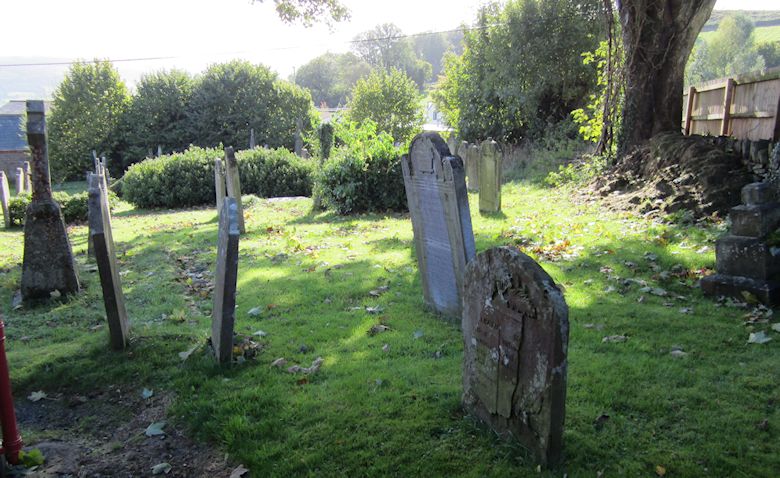 We do not yet know what the eventual fate of the gravestones at Penuel Chapel will be. One wonders whether only the monuments will be relocated, or whether the human remains beneath them will also be disturbed.

I’m sure most of those who buried their loved ones in Crug Glas and Penuel Chapel graveyards assumed they would remain there, undisturbed, in perpetuity.  Unfortunately this is not so: the Disused Burial Grounds Act 1884 and the Disused Burial Grounds (Amendment) Act 1981 make provision for the lawful movement and relocation of gravestones and disposal of any human remains lying beneath them. Both Acts may be accessed in full on the legislation.gov.uk website.

Graveyards are meant to be peaceful places, places where the recently bereaved can find solace and where later generations can renew family memories. Inscriptions on the monuments tell a great deal about the lives as well as the deaths of the people buried there. Even neglected graveyards have their own sad stories to tell.

But it is disturbing when the wishes and intentions of those who had buried their loved ones seem to be ignored. On the other hand, the pressure on land in the UK is such that burial grounds cannot be overlooked when attempting to find plots on which new homes can be built. Nor can the need for new burials to take place be forgotten. A recent survey by the BBC concluded that almost half of England’s cemeteries could run out of space within the next 20 years.

By recording and making known some of the details of such burial yards, we revive the memories of the men, women and children buried there and bring them to the attention of future generations.

I drove past The Old Crow again today and stopped to take a photo showing the barriers referred to in my previous blog.

I was shocked and saddened to see how much it has deteriorated since I last studied the cottage closely. Compare my picture taken today with the one below it taken by Google’s StreetView camera in 2009. 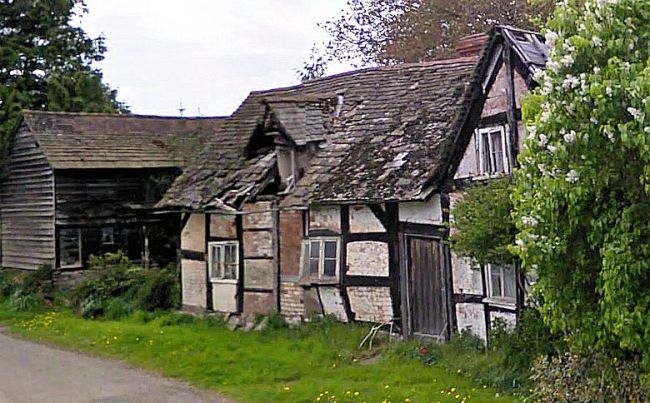 Two sections of brick wall at the west end of the cottage have collapsed, including one of the front windows. Also the stone tiles around the dormer are disappearing fast, and the dormer itself seems to be about to fall. Its window frame has gone. I do not think it will be long before the front of the cottage collapses completely.

What a sad end to The Old Crow. I’ll continue to keep an eye on this venerable landmark as it crumbles gradually into ruins.

Over the past thirty years, I must have made hundreds of journeys by road from South Wales to the Midlands and back. My favourite route has always been to follow the A438 from Brecon, crossing the River Wye at Glasbury, crossing the border into Herefordshire at Rhydspence and continuing through the villages of Whitney-on-Wye, Winforton, Willersley, Kinnersley, and Sarnesfield, eventually reaching Birmingham via Leominster Bromyard and Worcester.

Every time I take this route I’ve been intrigued by the sight of a tumbledown old cottage on the roadside at Willersley, just before the junction between the A438 and the A4111. Back in March 1997, I stopped the car and took the photo shown below:

Google’s StreetView camera captured an image of the cottage in April 2009:

As time passed, the cottage became more and more ruinous and since the above shot was taken, a metal barrier has been erected around the building, presumably to protect any curious passers by.

The dilapidated state of the building has always intrigued me, but what intrigued me even more was that on several occasions I had spotted through one of the windows a bare light bulb suspended from the ceiling. And the light bulb was switched on! How spooky is that! Surely no one could be living there now.

I last saw the tumbledown cottage while en route to Hereford three weeks ago, and my curiosity was such that I decided to see what I could find out about its history.

I managed to find a large scale Ordnance Survey map published in the 1970s which identified the cottage by name (at grid reference: SO3134147426). It was The Old Crow a short distance away from Old Crow Farm. But why was it named The Old Crow? Had it once been a pub, perhaps?

Hunting for references to the Old Crow cottage on the internet, I came across two postings about the cottage on photography forums:

In 2009, it was reported that two brothers lived there, both well into their seventies or eighties. One lived in the house, the other in an old caravan in the orchard.

Two years later, a photographer intending to take some shots of the cottage was confronted by a man described as quite smart, middle aged and wearing a jacket and tie. He said he was fed up with people nosing about and taking pictures of his home. He, or at least his car, was still there in April 2013.

It seems the cottage may still be inhabited after all!

Subsequent searches on the Internet have revealed that the property dates from the 17th century and was indeed a public house at least as far back as the end of the 18th century – probably even earlier. But it seems to have ceased operating as licensed premises in the decade following the 1871 census.

Over the last few days I have gathered together a great deal of information about the Old Crow, its owners and its occupants. I hope in the next week or two to create a special feature on my website to display the story of The Old Crow.