I’m back at last! It’s been three weeks since I posted my last blog, three enjoyable but busy weeks, as you’ll see.

The period began with tasks relating to the first annual Brecknock History Week, a series of events aimed at bringing Breconshire’s colourful history to the attention of the public. As a member of the Breconshire Local & Family History Society, I helped to research the history of some of the shops and businesses in two of Brecon’s main shopping thoroughfares: High Street Inferior and the Bulwark. We produced information sheets for display in shop windows, illustrating various aspects of the history of the building or the trades conducted there: 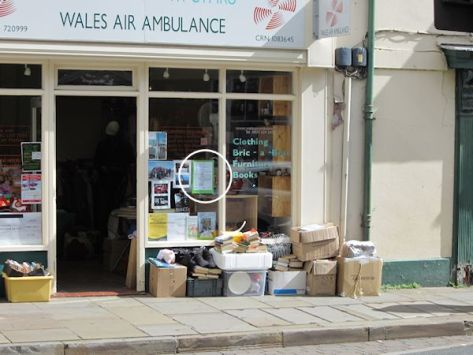 Brecknock History Week proved to be a great success and at the end of the week, many shopkeepers were reluctant to remove the information sheets from their windows.

One of the highlights of the past three weeks has been the visit of my son and his family who live in Berlin. My son was returning from a two month arts residency in Canada but he broke his journey to spend a week here in Wales where he was joined by his partner and their baby daughter who’d flown over from Berlin. It was great seeing them all and to have chance to spend time with our granddaughter whom we last saw in Berlin in May.

Sunday, 8th September was marked by the long-awaited Ball and Bray family gathering at Amroth in Pembrokeshire. At least once during most summers in the 1980s and early ’90s, when my children and my brother’s children were young, we would meet at Amroth for a day at the seaside. This year, twenty years on, my daughter decided to arrange to revisit these childhood days by the sea, this time accompanied by the next generation of children: my grandchildren and my brother’s grandchildren. Fifteen of us gathered together to reminisce over lunch in the Temple Bar Inn and then to enjoy games on the beach. 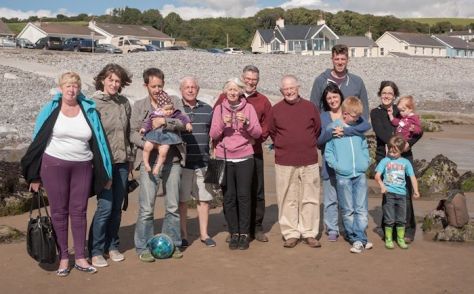 On Friday 13th (!) we drove to the County Archives in Hereford, where we spent the morning searching through microfilms of old parish registers.  Thanks to preliminary work done at home, the searches proved highly successful, so we were able to leave Hereford and begin our return journey before lunch. We noticed the many orchards in the Herefordshire countryside, heavy with ripening fruit.

On reaching Whitney on Wye, while still in Herefordshire, we pulled into the car park of the Boat Inn. We enjoyed a delicious meal overlooking the River Wye. This stretch of the Wye is known for its otters, but we didn’t spot any on this occasion.

After lunch, we headed home along the A438, following the course of the Wye and re-entering Wales at Rhydspence. Before crossing the Wye at Glasbury, we stopped to explore and photograph two Radnorshire parish churches that I wanted to add (eventually) to my on-line Welsh Churches and Chapels Collection.

The first stop was the village of Clyro, where we visited St Michael’s and All Angels Church. Clyro and its church have strong connections with the 19th century diarist Rev Francis Kilvert. Luckily the church was unlocked, so I was able to take some interior as well as exterior shots. I found it particularly interesting that nave has retained its original box pews, shown in the photo below.

Our next stop was the village of Llowes, where I photographed St Meilig’s, the local parish church. Again, we were lucky to find the church unlocked. There was lots to see inside the church, but probably the most prominent feature was the ancient Celtic cross, moved into the church to protect it from the elements back in 1956. 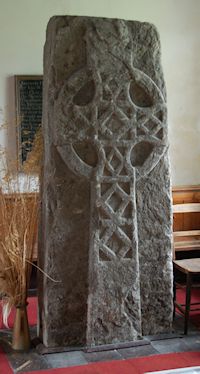 The Celtic inscriptions are thought to be from the 12th century although the stone itself is much older. In the next few weeks I hope to add much more detailed accounts of these two fine churches to my website.

I’ll try to update my blog more regularly over the next few weeks.